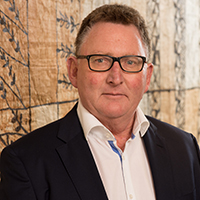 We are hosting a members' lunch with Adrian Orr, Reserve Bank Governor.

Adrian Orr has been the Governor of the Reserve Bank of New Zealand (RBNZ) for a year. This period coincides with some of the most significant reforms to the RBNZ for decades. The exclusive focus on price stability has been supplemented by an employment target. Monetary policy is no longer determined solely by the Governor but by a Monetary Policy Committee, and more stringent tier 1 capital requirements are also proposed by the RBNZ.

With this much change happening around the RBNZ, now is the perfect time to hear from Governor Adrian Orr about his vision for the Bank’s future role in the New Zealand economy.

Adrian Orr is the Governor of the Reserve Bank of New Zealand. He was appointed in March 2018.

Adrian is New Zealand born and bred, and primarily of Cook Island and Irish descent.

Following his Masters, Adrian remained in the United Kingdom for three years working as a Research Associate and tutor at the City University Business School, in London.

Adrian returned to New Zealand in 1988 to take up the position of Research Economist at the New Zealand Institute of Economic Research before joining the Economics team at the National Bank of New Zealand the following year.

In 1992 Adrian moved to France to work as an economist at the Organisation for Economic Cooperation and Development (OECD).

After holding this role for three years, Adrian returned to New Zealand and worked for a short time as a Chief Analyst at The Treasury, before returning to the National Bank as Chief Economist.

Adrian was appointed Chief Manager of the economics team at the Reserve Bank of New Zealand in 1997, providing core economic and policy advice to the Governor.

Between 2000 and 2003 he served as Chief Economist for Westpac Banking Corporation.

This was followed by a four year stint as Deputy Governor and Head of Financial Stability of the Reserve Bank through to 2007.

From 2007 until his appointment as Governor, Adrian held the positon of Chief Executive Officer at the Guardians of the New Zealand Superannuation Fund. The Fund has won a variety of international awards for investment, responsible investing, and leadership.