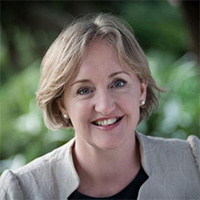 After the December reshuffle, the New Zealand government includes, for the first time, a Minister for Social Investment. In Hon Amy Adams, the Investment Approach now has a prominent seat at the cabinet table - she is ranked 6th in Prime Minister English's administration.

We look forward to hearing from the Minister how the government will continue to develop the Investment Approach. What will it do to improve New Zealanders’ lives? And how will it help deliver better public outcomes at lower costs?

Amy Adams was first elected to Parliament as the MP for Selwyn in 2008 and was re-elected by the voters of Selwyn in the following three elections.

Amy was educated at Rangitoto College in Auckland, moved to Canterbury in 1988 and has been a proud Cantabrian ever since.

Amy studied law at Canterbury University, graduating with first class honours in 1992. Before entering politics, she was a partner with Mortlock McCormack Law in Christchurch, specialising in commercial and property law.

In her first parliamentary term, Amy served as Chairperson of both the Finance and Expenditure and Electoral Legislation select committees. She was also a member of the Justice and Electoral and Regulations Review Committees.

With a change of Government following the 2017 election and a subsequent reshuffle in March 2018, Amy was elevated to be ranked number 3 in the caucus and was named National’s finance spokesperson.

Amy lives in West Melton with her husband Don, who is a sheep and crop farmer. They have two children.

Amy is a keen follower of, and occasional participant in, sport, and is a member of the Parliamentary netball team.