The Commerce Commission and the Reserve Bank of New Zealand (RBNZ) showed poor results in the Initiative’s new study Who Guards the Guards? – Regulatory Governance in New Zealand. Meanwhile, the Financial Markets Authority (FMA) ranked high for its regulatory behaviour.

The study, conducted by the Initiative’s chair Roger Partridge and research assistant Amy Thomasson, derives its findings from an in-depth survey of New Zealand’s top 200 companies.

Companies were asked to both rate and rank the regulators they interact with, allowing a nuanced insight into the regulatory cultures across different agencies. In total, the survey tracked 23 key performance indicators for 24 regulatory agencies.

“To be effective, regulators need to be respected by those companies they regulate,” said Mr Partridge. “The more transparent and predictable regulators are, the better they will be able to achieve their goals. And we need well-functioning regulators, not least to protect consumers.”

The survey also revealed a direct link between how regulators are governed and how well they perform. We found the separation of board and executive functions at regulators like the FMA contributes to greater accountability and to greater levels of expertise. Commission models like the one in place at the Commerce Commission fared worse. And the single decisionmaker model in place at the RBNZ fared extremely poorly.

“Our study does not leave any doubt that regulators need internal checks and balances to perform well,” said Mr Partridge. “A clear separation between the executive and the board, which is the gold standard for corporate governance, should also become the norm for regulators.”

The Initiative’s findings are supported by the chair of the OECD’s Regulatory Policy Committee, Professor Gary Banks AO, who wrote the foreword to the report.

Commenting on the study’s findings and recommendations, The New Zealand Initiative’s Executive Director Dr Oliver Hartwich said: “Especially at a time when the Commerce Commission will gain more powers under the Government’s Commerce Amendment Bill, it is vital to ensure that any such powers will be exercised wisely.”

Dr Hartwich also called on the Government to consider the findings in their review of the RBNZ: “As the Government is preparing for an overhaul of the Reserve Bank’s operations, it should subject its prudential regulatory functions to a proper governance mechanism.”

Further materials and infographic:
You can download Who Guards the Guards? – Regulatory Governance in New Zealand here. The report is co-authored by Roger Partridge and Amy Thomasson, with a foreword provided by Professor Gary Banks AO.

The infographic below summarises the ratings of New Zealand’s three top commercial regulators against a set of 23 key performance indicators. 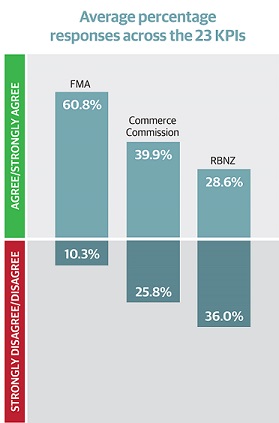 Who Guards the Guards? Regulatory Governance in New Zealand