Living after Midnight: For a better night-time environment

New Zealand’s way of regulating nightlife often restricts the opportunities for night owls. This has made nights overly tedious without improving issues of public health and security.

The prohibitionist’s approach here stands in contradiction to success stories abroad. Numerous cities have chosen a pro-active way of enabling a thriving nightlife. Melbourne, for example, found a way to deal with the colliding interests of residents and bar owners. Its agent of change principle makes sure that new venues and housing property are fit for the respective neighbourhood; Amsterdam has become famous for appointing a night mayor. Contrary to common belief, empowering nightlife has not only brought about solutions for some cities, but also a positive way of facing problems of nuisance, crimes and alcohol abuse.

Some of New Zealand’s troubles with the night-time are inherently due to the regulatory framework: So far, cities have been given neither the right tools nor the right incentives to work out their visions and strategies for a more thriving nightlife. To the contrary, the sole purpose of local alcohol policies, the most debated policies in the nightlife context recently, has been to minimise harm without weighing the benefits of the night-time economy. Measures in the nature of prohibistic times, such as reducing opening hours, have failed over and over again.

It is for this lack of modernity that New Zealand is partly missing the opportunity to express its rich culture after dark. Besides being dull in some (but not all) places, the current approach fails to make use of the economic and social opportunities a neatly managed nightlife can offer. The number of bars and taverns, for example, has decreased nationwide since 2008, when New Zealand had 600,000 fewer inhabitants than today. Relative to the population, the number of bars and clubs has even decreased between 2000 and 2018 by -2% and -7%, respectively.

It gets worse. Only 10% of people in New Zealand’s cities feel “very safe” in their city centre after dark. The only way to change this is to have more people out on the streets at night. Backstreet corners and shadowy figures do not disappear by sending clubbers home.

Recent trends regarding cafes, restaurants and takeaway food services indicate what would be possible if only New Zealand’s nightlife were given a supportive environment. Relative to population, the number of venues has increased by over 50% and 35%, respectively. This has increased opportunities not only for foodies but also for people looking for work in this sector.

Our three proposals in the report are a first step towards a more up-to-date approach to regulating nightlife:

First, appointing a night mayor ensures that all relevant interests are heard, whereas today, the benefits of nightlife are often left out of the conversation. It is about
bringing people together and talking. “Name all the elephants [in the room], even if it is a really small one stacked away under the table,” said Mirik Milan, former night mayor of Amsterdam. We should make this a habit.

Second, local policies to enable local visions for nightlife should be set up in a fruitful way. Incentives for the authorities would especially increase in a more decentralised framework. Cities that have a direct interest in their longterm economic wellbeing may think twice before implementing lockout laws to restrict the nightlife. Whatever strategy councils choose, they should be accountable to sound processes to ensure everyone is heard. At the same time, appeals processes have to be reassessed to make sure they stop being endless lawsuits.

Third, issues of public health should be tackled with specific programmes to help people in need of help instead of inconveniencing the rest of the population. The average alcohol consumption in New Zealand showed a substantially downward trend from the early 1980s and was flat over the past 20 years. In 2018, the average Kiwi over 15 consumed just shy of 9 litres of alcohol, which is not out of step with other OECD countries. Misuse of alcohol is not a nationwide problem but one of certain groups. More targeted initiatives can do good. The South Dakota Sobriety project, for example, helps those whose unhealthy relationship with alcohol resulted in criminal activity. Probation conditions that required no alcohol consumption resulted in sharp drops in re-arrest numbers – and in domestic violence. This kind of initiative could be trialled through New Zealand’s Drug and Alcohol Courts.

In times of ever-increasing population density in cities, today’s problems will become even more pressing for policymakers tomorrow. Clearly, our proposals and the international experience described in this report will not solve every problem of New Zealand’s nightlife. We believe, however, that they are the first steps towards a more balanced way to deal with the nightlife.

To read the Living after Midnight report summary, click here. 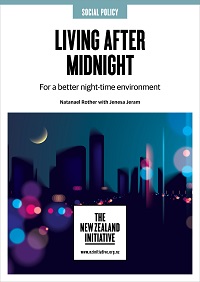 International inspiration for a thriving nightlife