The pandemic-induced recession creates a strong case for the Government to support struggling workers with targeted assistance, rather than a Universal Basic Income (UBI), according to the new policy paper Stay on Target by The New Zealand Initiative.

As the Government searches for fresh and innovative ideas to prepare for the worst economic effects of shutting down the country’s commerce over four weeks, it has tentatively proposed the introduction of a universal basic income scheme.

A UBI generally refers to a base rate payment made to all citizens, regardless of existing benefits, job status or age.

However, authors of the paper chief economist Dr Eric Crampton and research fellow Dr David Law say the UBI scheme is not the best policy tool for the present crisis.

“Giving everyone a lump sum does less good for those in the most need than finding ways of targeting assistance."

“Even a one-off payment of only $5,000 per capita would cost $25 billion. If there were no better alternatives in this crisis, that might be a cost worth bearing. But there are better ways of targeting that support to ensure it does the most good,” Dr Crampton said.

The government needs to improve support to prevent people from becoming unemployed in the first place. Dr Law suggests the option of short time work (STW) schemes which have already proven themselves successful in Germany.

“If these are applied as effectively as they were in Germany, employment could be 3% higher than it would otherwise be and the costs of STW would be significantly less than UBI,” Dr Law said.

But greater assistance is needed for those who already have and those who are yet to lose their jobs.

The policy paper suggests tax changes that could improve cash flows for businesses and individuals. But it also suggests an innovative extension of New Zealand’s Student Loan Scheme to cover every New Zealander.

The student loan scheme presently allows students to borrow up to $231.92 per week in interest-free living costs (a little over $12,000 per year). Under a revised scheme, non-students could borrow up to that cap to assist with income losses in 2020.

“The scheme has obvious merits. It is targeted, administratively simple and less costly than a UBI. Consequently, it gets more assistance to the vulnerable."

“Instead of giving a small amount to everyone, we would allow every person to borrow up to the amount of their income loss to a maximum of $12,000. Why give high earners a transfer when we could instead do far more for those who have taken the largest hits?” Dr Crampton said. 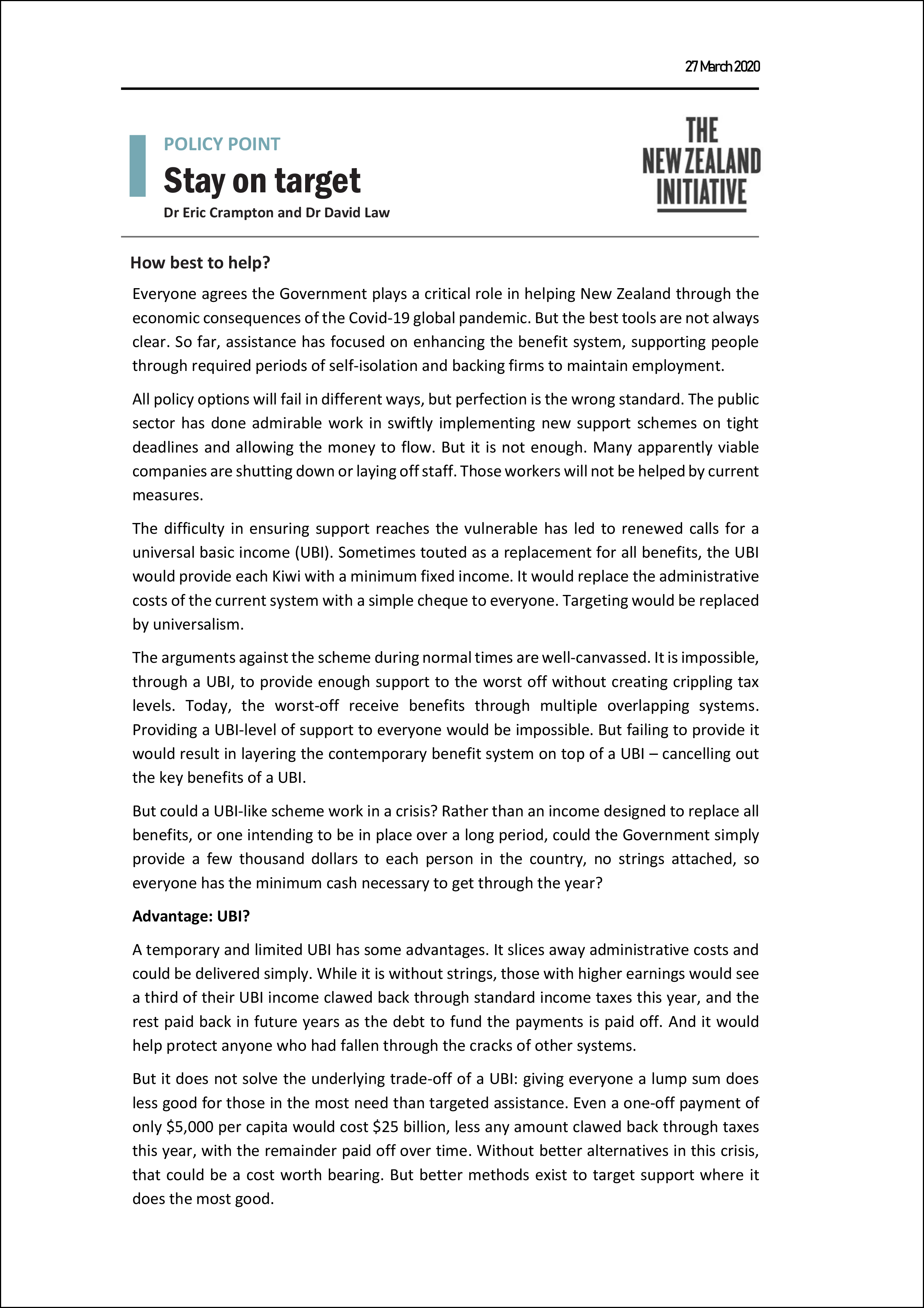