On 31 October 2017, the New Zealand Initiative requested the Ministry’s work on sugar taxes.

In terms of the Official Information Act, I am requesting the following information about the Ministry of Health’s work on sugar taxes:

On 26 February 2018, we received 37 documents in response to this request. Compilation time was not unreasonable given the volume of information that needed to be searched through. At the same time as we made this request, we also requested the report commissioned by the Ministry, and undertaken by NZIER, evaluating the effects of sugar taxes. That report was released under OIA in late January.

The Ministry’s advice to the Minister of Health was that there is insufficient evidence of the effectiveness of sugar taxes for those taxes to be recommended. See in particular presentations provided by the Ministry in Document #12. But the documents also show some conflicting views within the Ministry. The Ministry’s Chief Science Officer John Potter took a more favourable view of sugar taxes. The correspondence sequence between Ministry officials and Professor Gibson at #23 suggests that the Ministry sought simplified explanations of Gibson’s work for those who had not understood it. And Professor Gibson there notes that Potter misunderstood Gibson’s work.

Overall, the documents show a Ministry that was generally sceptical of the merits of sugar taxes and that raised substantive questions about the quality of the evidence in favour of sugar taxes. While John Potter’s paper supported sugar taxes, those parts of the Ministry more familiar with the economics literature opposed sugar taxes as ineffective. The critiques of sugar taxes’ effectiveness were similar to the critiques later raised by NZIER - and previously raised by the New Zealand Initiative.

The consistency of the Ministry’s advice with the later NZIER report suggests that delays in releasing the NZIER report were not due to any Ministry attempt to bury the report, but rather were due to normal bureaucratic difficulties – despite the need for the assistance of the Ombudsman in securing the release of the NZIER report.

It is especially interesting to read the Ministry of Health’s advice in the context of frequent attacks on Minister Coleman’s position from public health advocates. Where the Minister was often attacked as supporting industry interests, the documents instead reveal that he followed the advice of his Ministry on the effectiveness of sugar taxes. I particularly recommend the Ministry’s briefings provided in #12.


I have provided a synopsis of the provided documents below. The numbering in the synopsis below matches the numbering of the documents provided. I have occasionally provided additional explanatory notes – these are italicised and presented in square brackets to reflect that they are my additions rather than part of the summary.

#01: Summarises results from a number of studies, including their limitations, draws no conclusions. Notes that MoH’s justification for a tax would be externalities, asymmetric information, and time-inconsistency.

#02: 47 page draft document “Sugar taxes: discussion of the economic evidence” dated 15 September 2014, internal discussion draft. Notes one potential causal chain pathway by which sugar taxes might be effective – similar to the causal chain later noted by NZIER. Includes the observation that while tax may be regressive, health benefits may be progressive. [Note from Eric Crampton: this ignores that those in poorer cohorts whose consumption does not change will be doubly hit: they bear the tax while enjoying no health benefits.] Suggests that lower-income and higher consumption cohorts will be more sensitive to sugar taxes. “Whether a tax-induced SSB consumption decrease will lead to a decrease in total calories and by how much is still not clear based on this evidence” (survey of several papers). [None of Gibson’s elasticity concerns have filtered through to MoH at this point, so paper broadly overestimates likely effects.] Does raise concerns about substitution effects.

#03: Final form version of #2, above, internal draft dated 30 September 2014. Conclusion: “More information is required before the effects of a tax can be comprehensively assessed.”

#05: Summary notes on Grogger’s Mexican study and one other study. Sceptical about causal claims around Grogger: describes other controls as weak.

#06: Evaluation of Colchero’s study on Mexico. Recognises the problem in that study’s establishing of the counterfactual trend.

#08: Summary of Jenesa Jeram’s report for The New Zealand Initiative, The Health of the State, with redacted sections presumably reflecting those parts of the report not dealing with sugar taxes. Summary of report only, no commentary or analysis.

#09: Chart drawn from #2 above, similar to later NZIER work on the causal chain needed to get from sugar taxes to health benefits through a consumption pathway.

#10: Summary of reports given to the Minister’s Office on media scans on sugar taxes, including Katherine Rich’s piece on the Nielson data, summaries of Treasury’s working papers.

#12: Slides from presentations by MoH on sugar taxes 2016/2017. Notes that MoH’s position is that there is no evidence sugar taxes reduce obesity or obesity-related illness, but they are keeping a watching brief. Notes pressure from NZ health academics. Notes quality of evidence is a major concern, including failure to consider substitution within and between categories.

#13: MoH briefing to the Minister in advance of his meeting with a high school student who wanted to talk about sugar taxes. Provides some talking points including limitations in the Mexican studies.

#14: Sugar tax input to Submission on Appendix 3 of Global NCD Action Plan. Raises substantial concerns about the Mexican evidence including:

2) difficulties based on household purchase data as compared to individual consumption data;

3) lack of consideration of the administrative cost of tax or effect on household budgets, notes substitution to other fatty foods;

4) evidence from Mexico only beginning to emerge;

5) lack of control for simultaneous changes;

#17: Email from Croxson to unnamed persons on MOTU’s hosting of Gibson’s seminar. Notes that Croxson will be summarising his last presentation in a briefing for ELT. Date 22/11/2016

#19: Email from John Gibson with an attached non-technical summary of his work dated 4/12/2016

#20: Emails that were background discussion notes for a cancelled ELT meeting early December 2016. Chai had requested that a smaller group meet and workshop sugar tax developments. Request is from Deb Struthers to Bronwyn Croxson. Requests background to sugar tax, what we know and don’t know around the evidence, current positions on relative benefits of a sugar tax and other proposed alternatives including views of Sir Peter Gluckman – and MoH’s response. Notes specifically to include Gibson’s Motu seminar.

Croxson sends a draft powerpoint and Gibson’s non-technical summary. Fran McGrath asks whether additional alternatives could be listed for reducing sugar/calories from SSBs including eg minimum price per volume sugar. John Potter email says he does not find Croxson’s or John Gibson’s positions compelling, attaches his paper (#16). Fran McGrath replies noting that any tax should be volumetric (because she supports Potter’s mistaken interpretation that Gibson’s critique does not there apply?); that the tax should be 20%; that there should be sufficient lead-time for reformulation; that it should be combined with public information campaigns and that hypothecation to healthy living programmes would improve public response to the tax. Then, at the end, an email of 13/12/2016 noting that the discussion was cancelled at the last minute and may be taken up in the new year. Overall suggests division within MoH.

#21: Three versions of slides prepared for the cancelled ELT discussion. Notes NZ Government position is insufficient evidence tax will work to curb obesity, awaiting outcome of Gibson’s work. Notes emerging reports from Mexico that the initial fall in consumption has not been sustained.

#22: Email from Eric Crampton to MoH 12/12/16 in which Crampton notes the problem in Potter’s paper around Gibson’s work.

#23: Emailed back-and-forth from Gibson to MoH economists resulting in simplified findings of his results for the Ministry officials who have misunderstood what Gibson meant by ‘quality’ in his work. Gibson notes the Chief Science Advisor’s paper “which seems to be quite confused, in suggesting that the elasticity biases only matter to ad valorem…”. Andalon & Gibson paper working draft December 2016 on Mexican soda (Grogger) overestimation of tax effects appended to this file.

#24: Presentation slides from the GEN-sponsored Christmas debate on sugar taxes. A junior Ministry of Health official was asked to present the pro-sugar-tax side of the debate. These slides are that presentation and consequently do not represent the Ministry’s overall position. Jenesa Jeram, of the New Zealand Initiative, presented the alternative side of that debate.

#25: Summary of Treasury working paper 16/09 November 2016 (Summary dated 12/01/17). Report highlights weak link from tax to price to consumption to reduced caloric intake to reduced risk factors to reduced morbidity and mortality.  “The claim that a sugar tax would have “progressive” health effects (greater health benefits for those who are poorest and least healthy) is put in doubt by the lack of evidence as to the likely substitutions that may occur.” Paper highlights regressivity concerns.

#26: Memorandum on Treasury Working Papers on Sugar Tax, to Jonathan Coleman, on the Gardiner and Creedy Treasury working papers. Notes regressivity of soda and sugar taxes, conditions under which substitution effects undo the effects of any SSB tax.

#27: Summary of Briggs et al., including potential for unintended industry response, notes study’s limitation in lack of consideration of consumer response to reformulation or consumer substitution.

#29: Email from Croxson to unnamed party thanking for the two Treasury working papers on sugar tax, noting consistency with advice MoH has provided to the Minister on the issue, summarising the papers, offering to provide a presentation.

“The papers are consistent with the advice the Ministry of Health has provided to Minister Coleman on this issue. In particular, the two papers both highlight critical gaps in the evidence which underlie our current position that there is insufficient evidence that a sugar tax would be effective in reducing obesity.”

#33: Summary for Minister Coleman of the Cochero et al results. Notes the study does not disentangle tax from other initiatives including overahauls of the drinking water infrastructure. Notes that volume of water purchased dropped more than purchased soda, suggesting that access to safer drinking water drove both results.

#34: Response to Public Health Expert blog post of 28 February. Notes that Blakeley emailed a number of MoH officials warning that the Treasury report [see #29, above] was likely to be misused. The response notes that Creedy’s paper had attracted no attention at time of publication, likely because it was too mathematical, and that the other Treasury paper had also drawn only limited attention. Notes that the blog post cites evidence that the Ministry has already reviewed and had found wanting: “relied on weak data collection methods; modelling study based on assumptions about more uncertain aspects of SSB taxes; study of Chilean tax which used inappropriate methods for estimating consumer response to price changes”.

#35: Extract from Briefing to NZMA, sent 28 March 2017. Notes that a sugar tax is not included in the government’s Childhood Obesity Plan of October 2015 because “there is insufficient evidence at this stage that a tax would be effective in reducing obesity and improving health outcomes.” It notes that the government is keeping an active watch, and notes Professor Gibson’s work currently underway.

#36: Summary of Silver et al PLOS 2017 results on Berkeley’s soda tax. Notes limitations including no information on construction of the counterfactual.

#37: Email to Katherine Rich requesting the data used in the study referred to in #10, above.


On 22 November, the Initiative received a preliminary document consisting of reports that were already in the public domain. For completeness, that document is also now attached and should have been included in the initial listing of released files. This single PDF includes the following items: 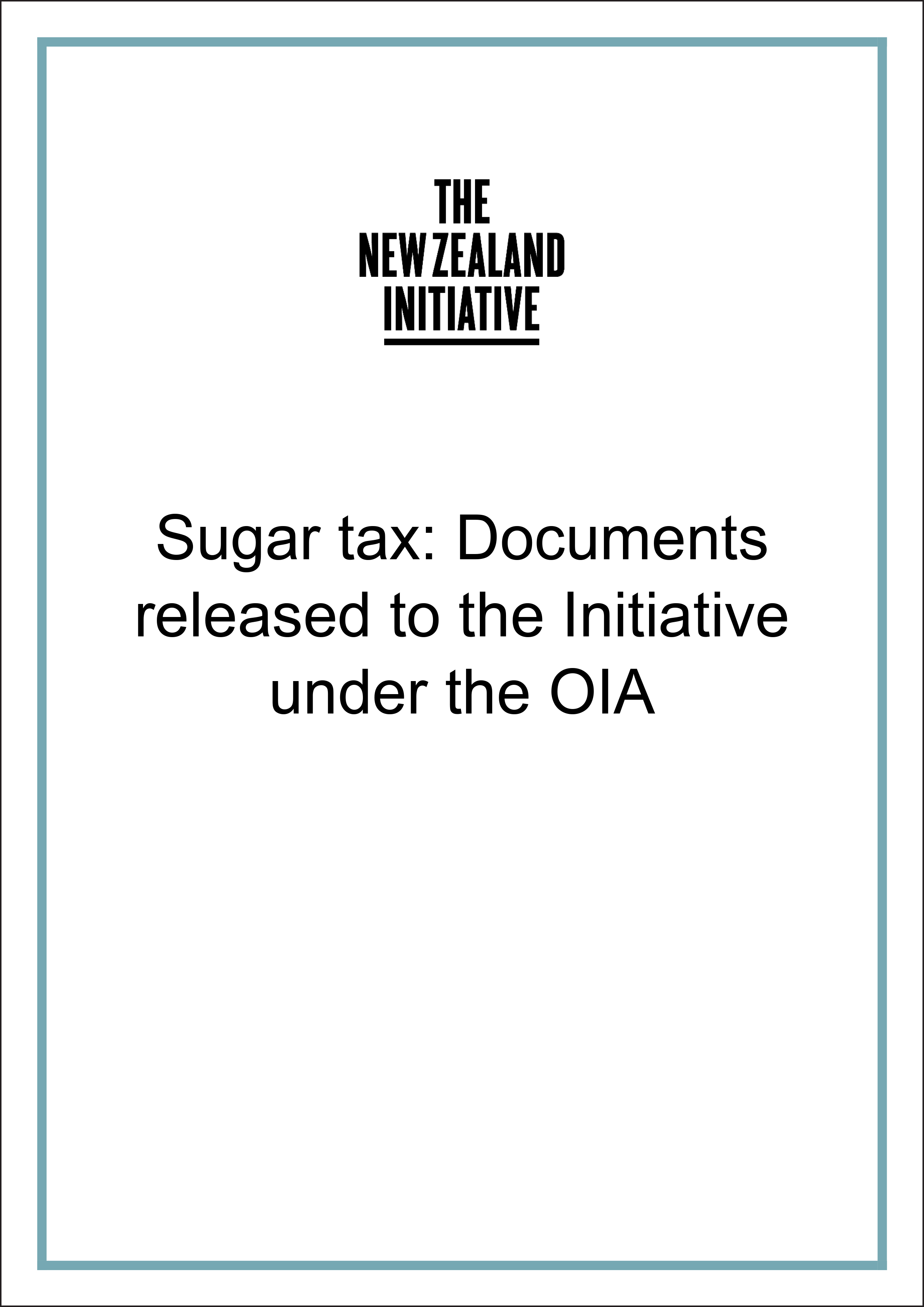 The Health of the State