Decade of Debt: The Cost of Interest-free Student Loans

A decade on, the policy has proven rather expensive with no substantial benefits.

Removing interest payments from existing student loans cost the government over $1.4 billion in 2006, and the costs have mounted since then. And despite the rather high cost, the programme has not proven particularly effective at achieving its stated goals of making tertiary education more accessible for everybody – no matter their background.

But why do student loans exist?

Ensuring equitable access to a tertiary education is essential for any free, fair and prosperous society. But tertiary education has costs, and students are usually of modest means and limited credit history. Obtaining a loan through the private market to pay for these costs, without any tangible collateral or family wealth is often not an option. A universal, government-backed student loan scheme, combined with financial assistance for living expenses, goes some way to promoting fair access to tertiary education. And so the New Zealand government introduced the Student Loan Scheme Act 1992 to better enable students and their families to pay for the costs of tertiary education. The scheme remained largely unchanged for almost a decade.

However, after winning the 1999 general election, the Fifth Labour Government pledged to cut the costs for tertiary students by introducing a fairer loans scheme. During the 1990s, annual fee increases had been subject to the discretion of tertiary education providers. To help alleviate the costs of tertiary education, government introduced a temporary tuition fee freeze in tandem with removing all interest charges on loans during the study period.

But the big policy move came in 2005, when the government kept its campaign promise by extending interest-free student loans to all student loan borrowers residing in New Zealand.

But how effective is the current interest-free student loan scheme, and is it really fair?

Eliminating interest-charges on all student loans was a superb decision in political expediency; politicians compete for votes and people will naturally vote for policies that most benefit themselves. Lowering or deferring the financial burden of tertiary education gains the vote of many tertiary students – and the votes of their parents. But it has not improved access to university. The policy is best described as a costly failure.

The interest-free student loan scheme is simply not fit for purpose. This report finds that there is no compelling public policy case for universal subsidised student loans. The scheme has, to date, resulted in almost $6 billion taxpayers’ dollars being written off. Interest-free student loans are costly and ill-targeted. It is a policy that has had no major impact on tertiary participation rates, nor has it led to any conceivable improvement in tertiary equity. 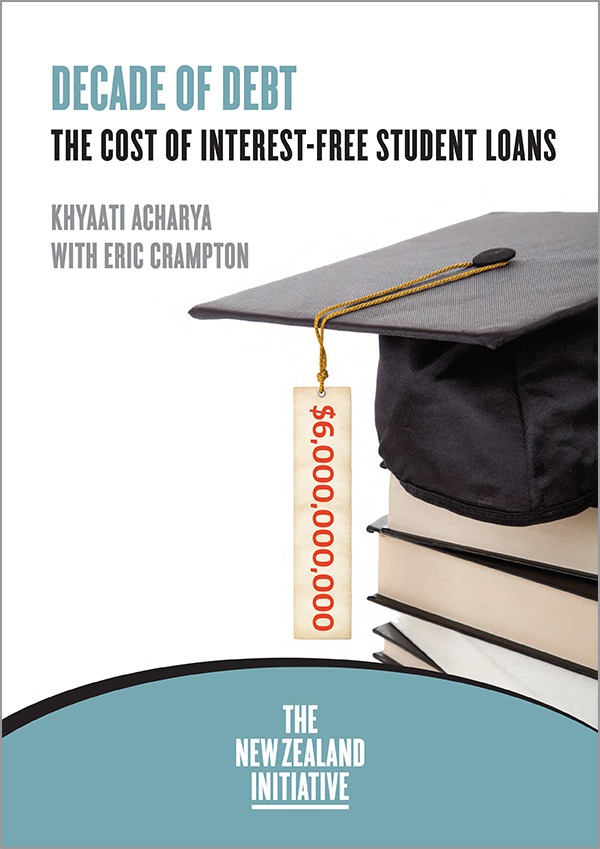 Khyaati Acharya talks about Decade of Debt: The Cost of Interest-free Student Loans

Decade of Debt: The Cost of Interest-free Student Loans