When New Zealanders look at Switzerland, they see a country that may superficially remind them of their own. Mountains, lakes and stunning scenery are features of both New Zealand and Switzerland.

At the same time, New Zealanders do not know much about the way Switzerland works – and they understand it even less. Switzerland’s highly decentralized system of government seems confusing; their direct democracy may appear archaic; and though there is a Swiss federal government, it is always made up of all major parties with no real parliamentary opposition.

From a New Zealand perspective, it is hard to imagine how this weird system of government works. It is even harder to figure out how Switzerland has managed to become rich: a land-locked country, with no natural resources, four official languages but now twice New Zealand’s per capita GDP.

To find out more about Swiss policy settings and spread the learnings on Switzerland, we invited members of The New Zealand Initiative to join us for a study tour.

From 21 to 26 May 2017, a group of 39 people headed by Mercury’s chief executive Fraser Whineray took part in the Initiative’s ‘Go Swiss’ delegation. Our delegation mainly comprised of CEOs and chairs of large New Zealand companies, who travelled with us to share in the Swiss experience.

The group was based in Lucerne, from where we also travelled to Thurgau, Zurich, Lugano and Mt Pilatus. We met with Swiss politicians from all three tiers of government. We talked with industrialists, business leaders, regulators and heads of business associations. We listened to people from central and private banking backgrounds. We engaged with entrepreneurs, regulators, journalists and public intellectuals.

It was a week of learning that left us impressed with some of the features of Switzerland we discovered. It also made us question New Zealand’s own policy settings, which we often take for granted. And our visit inspired us to think boldly about New Zealand’s future.

This document summarises some of the key themes that emerged from our visit to Switzerland. Though this document has been circulated to members of our group for discussion, this does not imply that everyone involved came to the exact same conclusions. But they would have all thought about the issues that are highlighted on the following pages. And they are prepared to contribute to a discussion on how to apply our learnings to public policy reform in New Zealand.

We believe that developed economies can and should learn from one another. In doing so, we need to move beyond old stereotypes and prejudices. And we have to question ourselves.

That is exactly what The New Zealand Initiative’s delegation to Switzerland was all about. 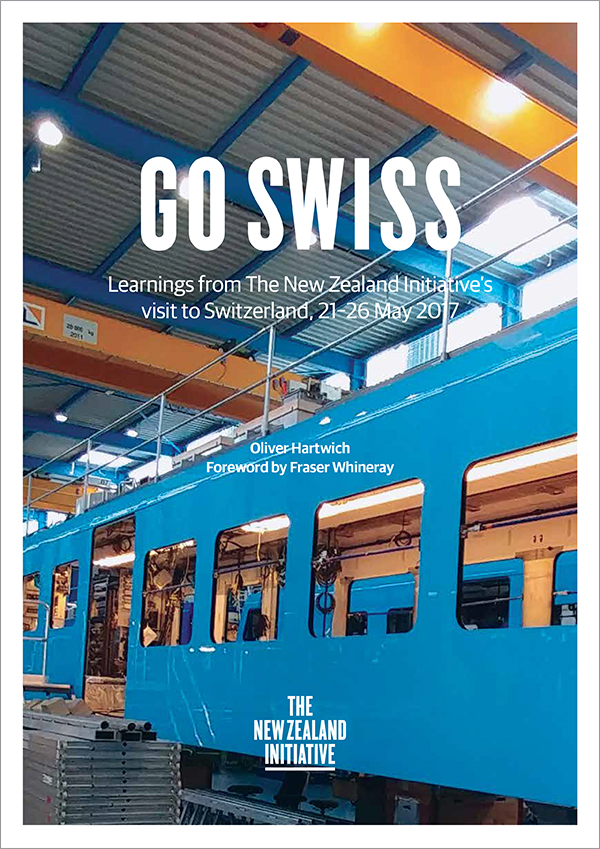