Reports & Media > Reports > Research Note: How bad might the lockdown be for jobs and income?

Research Note: How bad might the lockdown be for jobs and income?

If New Zealand can’t recover from the economic “heart attack” of self-imposed lockdown, it could face GDP losses at Great Depression levels, according to a New Zealand Initiative research note.

While the Covid-19 pandemic has not ruined New Zealand’s economic capabilities, the lockdown has forced the country into an unprecedented productivity pause which the Initiative’s senior fellow Bryce Wilkinson says could slice away about $10,000 per household this year.

Dr Wilkinson outlines estimates about what the OECD, IMF, Goldman Sachs and the New Zealand Treasury expect from the coming virus-induced crisis which some economic commentators already say may be more damaging than the Great Depression and World War II.

Earlier this week, Minister of Finance Grant Robertson told Parliament’s Epidemic Response Committee that economists estimate 8-30% unemployment in New Zealand. For comparison, Dr Wilkinson says, this country’s highest jobless rate since the 1930s was in 1991, at 11%.

The research note How bad might the lockdown be for jobs and income? says both the OECD and IMF are changing their tone about the globe’s economic health as the two forecasting heavyweights cautiously revise down their GDP estimates.

For instance, the OECD now shows New Zealand’s decline for the 2020 June quarter could hit 28%. That’s the equivalent of about $24 billion in real income, or approximately $10,000 per Kiwi household.

“Official economic forecasts are now more realistically negative. But there is a lag in their adjustments compared to observations and a tendency to be optimistic for 2021 and beyond, without explaining how the deep problems in Europe might be resolved,” he says.

New Zealand’s Treasury’s economic modelling of a 10-15% drop in GDP over the next quarter is similarly bleak.

“The good news is that many Asian countries are doing relatively well economically, as will Australia and New Zealand if they pull out of the economic holes they are digging sooner rather than later. If New Zealand fails, output losses at a level of the 1930s (see above) are entirely plausible.”

However, he added that the Government’s stopgap measures of subsidies and payouts are not long-term solutions.

“When the Government pays $9 billion in wage subsidies, it is not adding to national income. It is merely shuffling who will spend or save that $9 billion. If one group is now $9 billion better off, everyone else is $9 billion worse off, although they might not know it. 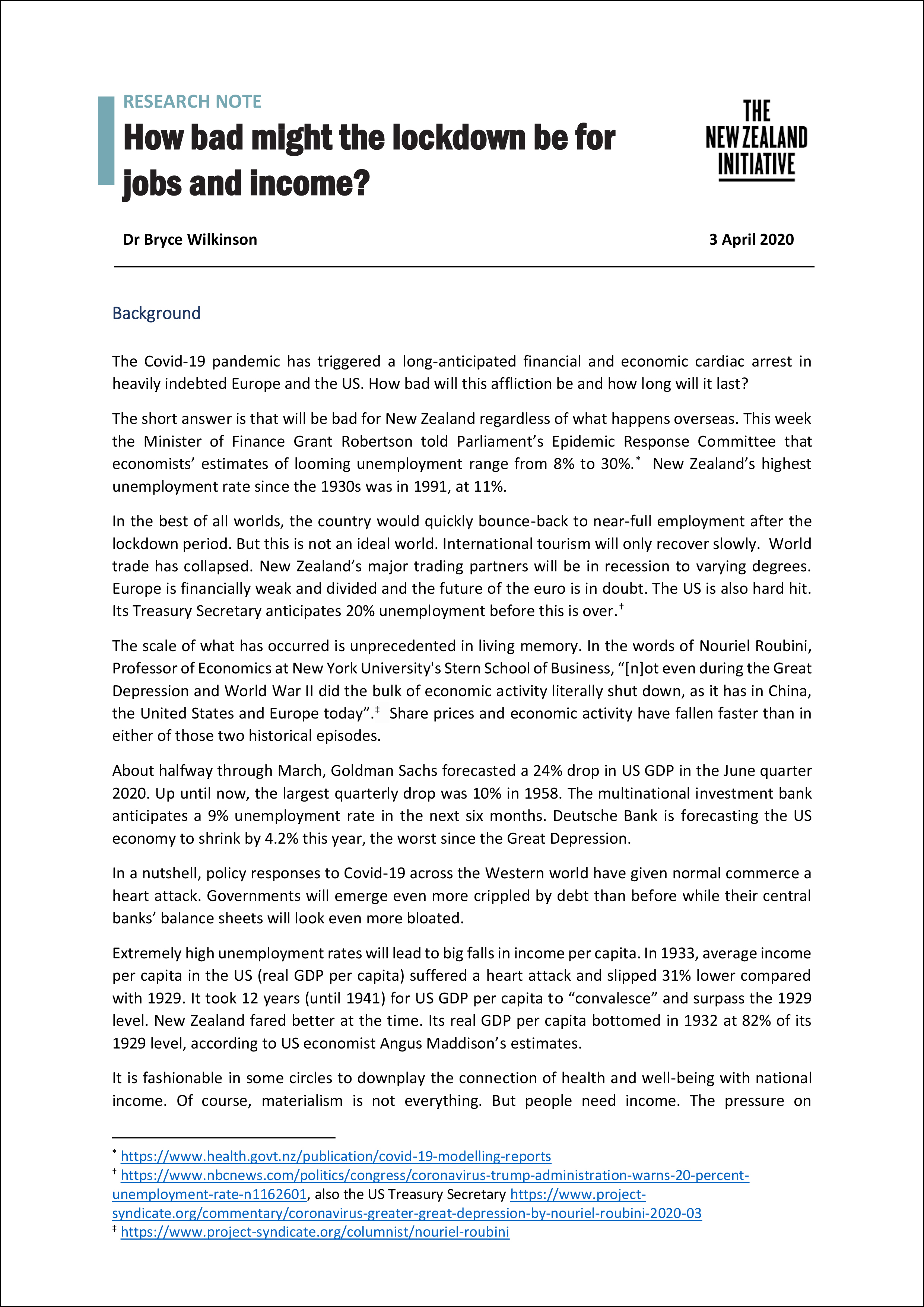