Reports & Media > Reports > Research Note: Deficit spending in a crisis: why there is no such thing as a free lunch

Research Note: Deficit spending in a crisis: why there is no such thing as a free lunch

The New Zealand Initiative supports government deficit spending during the Covid-19 crisis on the basis that it is funded by conventional borrowing. This report explains why funding deficits by central bank credit creation with no credible timetable for reversing the situation is a route to financial disaster.

The cost of the Covid-19 Alert Level 4 lockdown in lost jobs and national income is horrendous, and the government spending response is unprecedented in living memory. To date, over $20 billion of new spending has been committed, with parliament approving up to $50 billion.

That spending must be funded from borrowing, but how? Funding by printing money debases the currency and the golden rule is to fund deficits by conventional borrowing.

At first blush, the funding options are determined by the Minister of Finance on the advice of the Treasury, with the Treasury's Debt Management Office implementing the decisions. The maturity structure of the public debt is a Treasury balance sheet management issue. Conventional funding certainly seems to be the intention, for now. Treasury has announced it will issue an additional $29 billion of additional bonds and bills by June 30, 2020.

Not so fast. Enter the Reserve Bank of New Zealand.

The 'RBNZ's job is to tighten or ease monetary conditions in accordance with agreed inflation targets and keeping output growth and unemployment in mind. It does this by changing the overnight cash interest rate (OCR) or by open market operations that change the term structure of the government debt in the 'public's hands, along with banking system cash.

The RBNZ has a lot of operational freedom. If it wanted, it could monetise the public debt and undo Treasury's balance sheet debt management. Indeed, on March 23, the RBNZ announced it would purchase $30 billion of government bonds some time over the next 12 months.

Central bank purchases of government bonds from the private sector inject cash into the banking system, dollar for dollar. This creates a substantial easing of monetary policy. It raises bond prices and reduces yields and the cost of government borrowing. The aim is to reduce deflationary pressures and output and employment losses during a recession.

This is an orthodox open-market operation referred to by some writers as quantitative easing (QE). In the New Zealand context, it is a substantial move towards financing the fiscal deficit by central bank credit, depending on timing. Normally, this should not be a major worry.

What the Reserve Bank is proposing with these bond purchases appears fully justifiable considering its statutory objectives. The difficulty is in the dynamics. In the fullness of time, the same statutory objectives should see the central bank selling government bonds back to the private sector to reduce inflationary pressures and an over-heated economy. There need be no permanent lift in Reserve Bank credit or change in the Treasury's preferred mix for the composition of the public debt.

At least, that's what it says in the textbook. But it is not what has happened in the US, Europe, Japan or the UK. Central banking credit creation has become a one-way upwards ratchet since the 2008 Global Financial Crisis. It has helped fund ongoing fiscal deficits, which creates crippling public debt and troubling asset price inflation as people take advantage of low-interest rates to borrow heavily to buy risky assets. The risk is that New Zealand will go the same way.

The onset of Covid-19 brings this to a head. Heavily indebted governments must spend more but cannot see a way of raising taxes, cutting other spending, selling assets or adding to their public debt. They want a soft option. Over 80 countries have already applied to the IMF for financial support during this crisis.

Those demanding a soft option will find a supplier. Some reputable economists are now arguing that giving away money or central bank credit is that answer.

These economists seem to have a willing audience. Some central bankers are telling markets they will do "all it takes" to hold off financial disaster as if they have their hands in every taxpayers' pocket. A columnist in the influential UK Guardian newspaper even asserted central banks have an "unlimited budget" to determine who sinks and who swims.

Viewing the public purse as bottomless and that central bank funding can backstop any problems is a recipe for financial disaster. Yet those calls are being made and heard in New Zealand.

Up to now, the central banks in Australia and New Zealand have largely stood aside from the potentially disastrous development of escalating central bank credit and public debt ratios. All that relative solidity now seems to be at risk.

This research note explains why the temptation for central bank credit creation in a crisis should be restrained and reversible. Once on this seductive path, the political economy of getting off this debt escalator is extremely difficult and undermining financial stability. This political economy problem is a fatal weakness in these proposals.

To support financial stability, Budget 2020 must provide a credible plan for returning public debt to prudent levels after the Covid-19 crisis and ensuring that the Reserve Bank's balance sheet is contained. 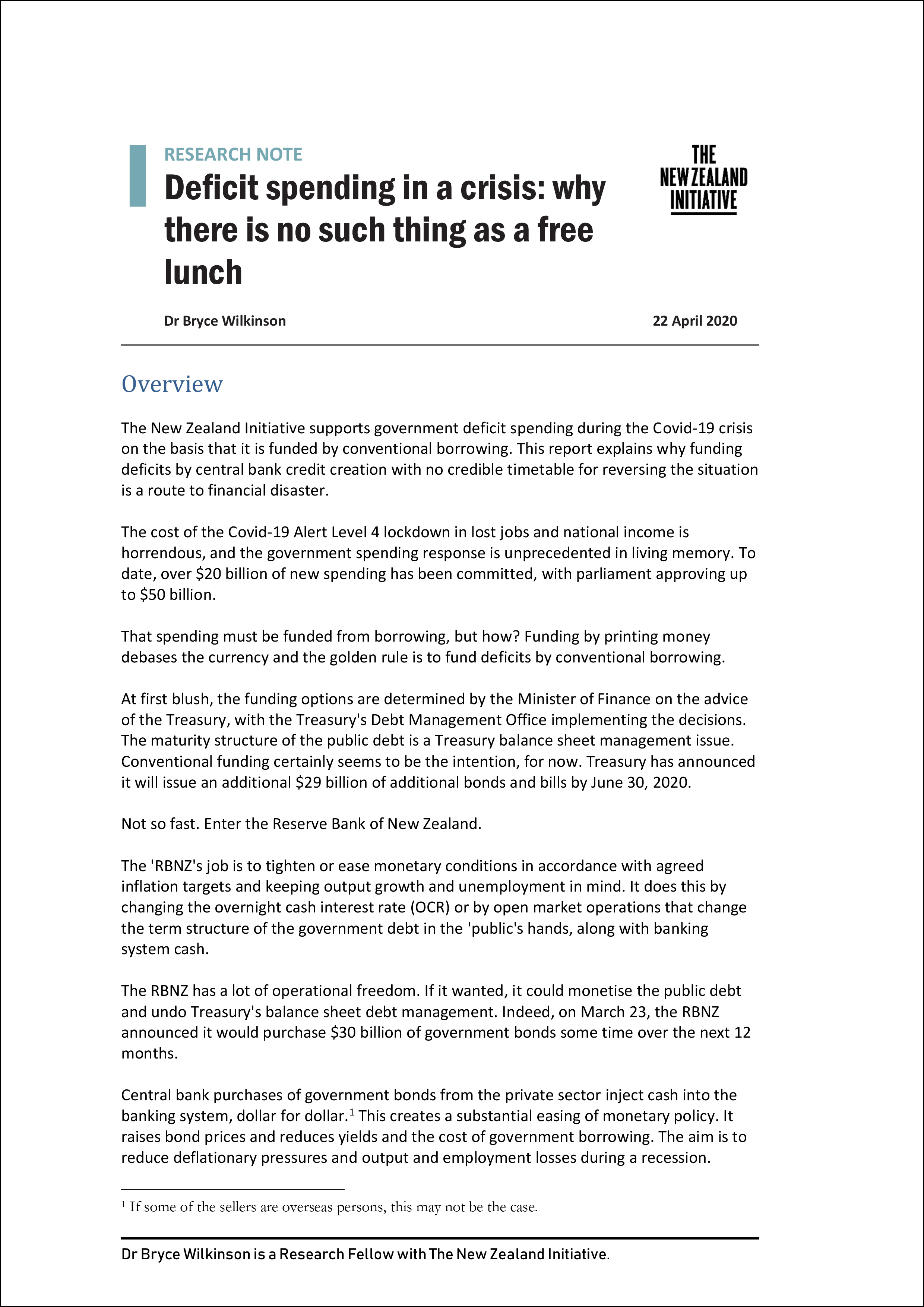 The cost of the Covid-19 crisis on our economy

Research Note: How bad might the lockdown be for jobs and income?